There used to be more than 100, only a few remain, but one stands out and is the symbol of the city.

Asti, together with Alba and six other Italian municipalities, is one of the " cities of a hundred towers". Ancient maps show it in its medieval splendour, with its massive walls, stately palaces and a plurality of towers, a distinctive sign of the power of the rich and noble families who vied for control of trade and finances. A visit to Asti is not complete without a closer look at the towers to see that some of them are still perfectly visible, perhaps cut off, but they are still there to remind us that an aristocratic dynasty once lived in the shadow of that building. Others are incorporated in 18th-century buildings and it takes a little visual effort to see them reappear in all their elegance. But there is one that still survives and has become a symbol of the city: the Troyana or Clock Tower, with its 12 mullioned windows with rounded arches, stands in a corner of the elegant Piazza Medici, almost competing for the spotlight with Materno Giribaldi's aqueduct fountain in the centre.

From heritage of an extremely prosperous historical period to emblem of a community.

With its square plan and side of about 5 metres, it is 44 metres high and dates back to the 13th century, a period when Asti saw great urban renewal. It was an integral part of the fortified house of the Troyas, one of the families of the merchant aristocracy of Asti who practised finance in various European cities. In the 15th century, the dynasty became extinct, the fortified house was abandoned and later demolished, but the Troyana Tower remained as a reminder of the splendour of that era. Then, it became the property of the municipality, which equipped it with a bell to mark the hours of the day, but also to be rung whenever it was necessary to warn the population of some event or threat. The bell that the people of Asti still hear today as a familiar sound dates back to 1531 and is one of the oldest in Piedmont. 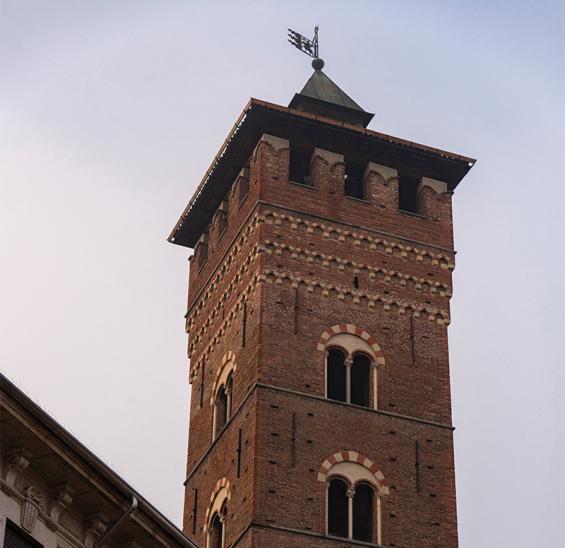 Two hundred steps except one: from the crenellated floor a 360° view of the city and the surrounding landscape.

There are exactly 199 wooden steps that must be climbed to reach the top, from which it is possible to admire the city's street network, the several churches with their bell towers, the palaces of Asti and the other towers: a view that then extends to the Monferrato area and the surrounding villages before reaching the imposing outline of the Alps and the sea-scented Apennines.