A little treasure in the middle of nowhere, amidst mint-scented woods and meadows.

It was to escape the raids of the Saracens, who entered the Ligurian hinterland around the 10th century and wreaked havoc, that the inhabitants of Saliceto moved to the smaller, safer hamlet of Lignera, where the small church was built, and served as parish church until 1550. This might be a story like so many others here in the Langa, but...this small church of San Martino in Lignera preserves a cycle of frescoes that are so beautiful and original that they have earned it a place among the national monuments of Italy. It was built of sandstone, and that proved to be a very good choice. It was thanks to this stone, which does not allow moisture to pass through, that the marvellous 15th-century frescoes have survived, filling the walls of the presbytery and the apse with symbols and visions. There is no information about the authors of this cycle of paintings, perhaps they were pilgrims passing by, but at least two styles can be observed, one attributable to the masters, the other, more essential, probably being the work of some young pupil. Surely the colours that glow like the sun on a clear day do not go unnoticed: yellows, oranges, reds and vivid hues. 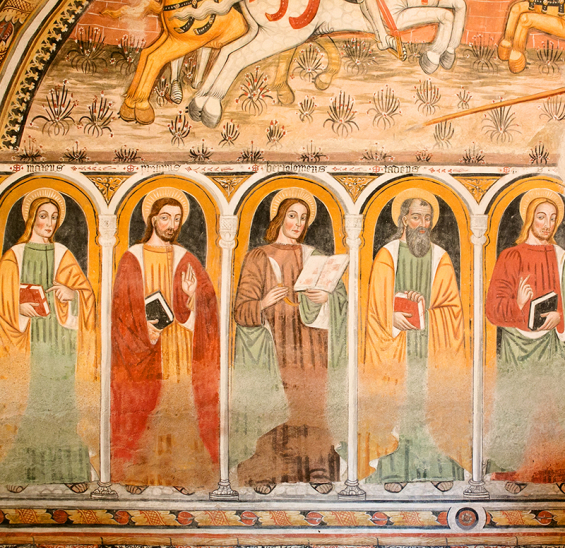 Mullioned windows built in a single block, a re-built bell tower and many mysteries.

Another unique detail, something rarely found in a religious site from the medieval era, will not go unnoticed: a touch of irony. Look at San Martino's horse, it is laughing. The horses in the tournament also snigger. And what about that servant who seems amused to see the miraculous healing? Or that evil archer who, in the act of piercing San Sebastiano, stupidly shoots an arrow into his own neck? There are indeed many interesting facts and mysteries surrounding this small church. It is enough to think that the Romanesque bell tower, at some point, had serious stability problems due to its slope. And so, in the 1950s, a local builder dismantled it piece by piece, numbering each block, and then rebuilt it as it was... or almost: some gossip said that, after so much painstaking work, a stone was left over. Who knows?

VISITS
Visitable
YES
PRICE ACCESSIBILITY AND SERVICES SPECIAL INITIATIVES
The information contained in the page may vary. We recommend you to check the details by contacting directly the good or service of your interest to fully enjoy your stay in Langhe Monferrato Roero.