Watching over Asti is San Secondo, the city's patron saint.

Asti has plenty of charming squares, but as in all cities, there is one that represents the "salotto buono" (good salon), the place for meetings and social life; in Asti this square is the one in front of the Collegiate Church of San Secondo and the Town Hall. The square is teeming with life: young people meet there, mothers gather with pushchairs, elderly people supervise the benches... The mayors have been observing it from their offices for decades, and those voices reaching the eighteenth-century rooms of the town hall are nothing more than the thermometer of a society that is changing, accommodating and transforming itself. San Secondo watches over the city from his niche on the façade of the imposing church and seems to listen to all the talk of the citizens, bringing them comfort in their time of need and rejoicing in their happy days.

The Collegiate Church is very ancient. It has come down to us with its Gothic lines, its slender naves, its immeasurable heritage of art and its very ancient crypt whose foundations date back to the 6th or 7th century. It is dedicated to San Secondo, a figure around whom history and legend are closely entwined: perhaps he was a bishop, or a noble citizen who mediated in resolving conflicts, perhaps he was a Roman soldier martyred for embracing the Catholic faith, or perhaps all of the above. Whatever it may be, San Secondo is in the heart of every true native or adopted citizen of Asti, because Asti, by virtue of its Saint, is a city that was able to resist great enemies, but also welcomed those who arrived there in peace. The body of San Secondo, who lived in the 2nd century AD, rests in a silver reliquary in the crypt of the church. 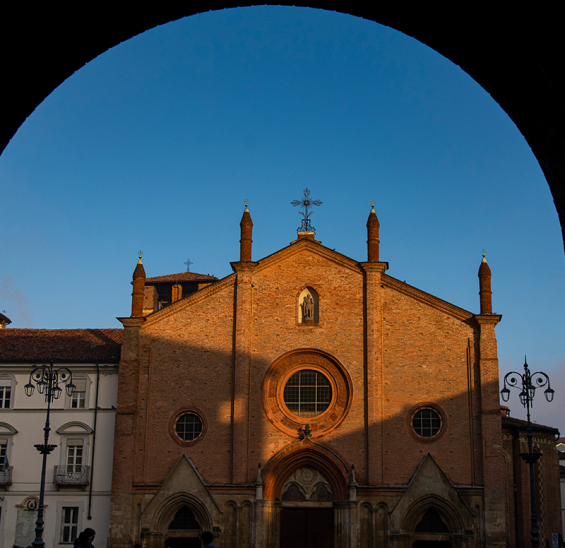 A very vivid devotion and a Palio that is only run at the behest of the Saint.

The Asti citizens do not just honour him on the first Tuesday in May: the celebration begins in the previous days and on Monday he is celebrated with a great firework display, followed by a rich calendar of events culminating with the presentation of the Drappo del Palio (Palio Banner) to the Collegiate Church of San Secondo, flag shows and processions, and then it ends on Wednesday with the traditional Carolingian Fair. And then there is the Palio in September, which is held with horses, men and banners, but can only begin to the cries of "Go and may San Secondo assist you!”