Bene Vagienna, a thousand-year history that reappears and impresses.

Bene.  A milestone. Something positive from which you can start and embark on a journey back to the time when Augustan Rome conquered the lands of Piedmont populated by the Ligurians. The Bagienni (or Vagienni) lived here and the Romans made a colony out of it and called it Augusta Bagiennorum (or Vagiennorum), at the same time as Pollentia (Pollenzo) and Alba Pompeia (Alba) were founded nearby. Augusta Bagiennorum   soon became a centre of strategic importance to control the transits between the Po Valley, the valleys of the Po tributaries, the Alpine passes and the sea. In the Middle Ages it was ruled by various feudal lords, from the Bishop of Asti to the mighty Costa family ofChieri, then under the Savoy family and eventually it followed the fate of the Kingdom of Italy.

Like two Indiana Jones, Giuseppe Assandria and Giovanni Vacchetta based their work on maps and charts. A note on 17th-century papers, written by Monsignor Agostino della Chiesa from Saluzzo, mentioned some columns that had surfaced in the Roncaglia plain. That was enough to them to clear their path and they started excavating right in the area suggested by the documents, in that vast plain. The excavation campaign was not easy, but between 1892 and 1909 the two archaeologists and scholars gradually succeeded in bringing the Roman colony of the first century BC to the surface: here comes the outline of decumanus, here comes a house and then many fragments, amphorae and furnishings.

Weapons, amphorae, epigraphs, statuettes and bricks found during excavations now fill the rooms of the 18th-century Palazzo Lucerna in Rorà, which today has been transformed into the Civic Archaeological Museum. 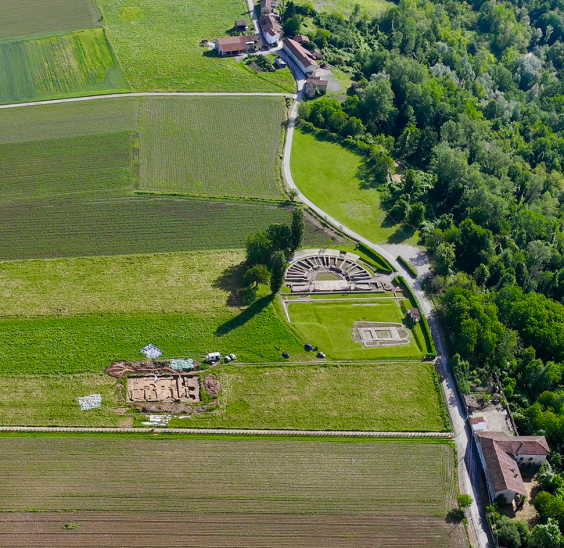 A trail so as not to forget.

Thanks to the excavations, Augusta Bagiennorum gradually rediscovered its streets and forms, revealing a city of about 21 hectares, surrounded by a moat and monumental gates at both entrances. Within the present Archaeological Site, the visitor trail (which also includes explanatory panels offering a reconstruction of the original settings) follows the country road from the small church of San Pietro and includes the remains of the theatre and amphitheatre. In the inner courtyard of Cascina Ellena, a real Orto Romano (Roman vegetable garden) has been reconstructed, as it was inspired by the Roman tradition of domestic gardens in the 1st-2nd centuries BC, where vegetables, fruit and aromatic herbs were grown for everyday use.

Listen to the Podcast:

The information contained in the page may vary. We recommend you to check the details by contacting directly the good or service of your interest to fully enjoy your stay in Langhe Monferrato Roero.